4 Tips for Staying Healthy in Thorold this Winter

Harmful Germs May Be Growing in Thorold Home Plumbing 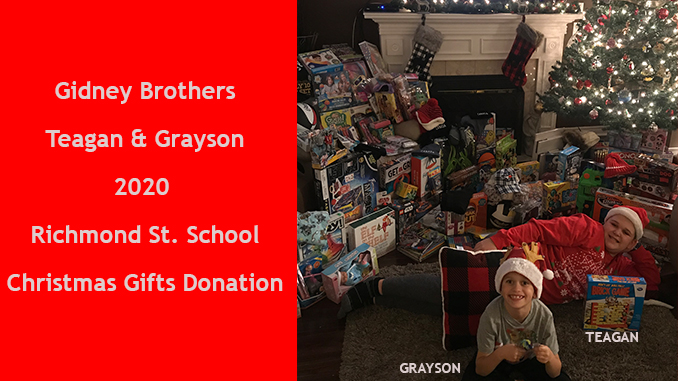 For more than 150 years Santa Claus has descended into Thorold to share the joys of Christmas.  This year, Teagan and Grayson Gidney have followed Santa’s example. They continue to boost the tradition of the gifts of Christmas by offering an impressive donation to students at Richmond Street School in Thorold.

This is a heart-warming story to celebrate the spirit of Christmas right in our community.  As the story grows each Christmas, we know for the past 7 years, the Gidney brothers have organized their holiday tradition and helped other children at their school.  This year their efforts have fulfilled the Christmas wish lists for 15 students.  The Gidney boys’ mother, Amy tells us that Teagan learned at a young age that there are many kids that need some extra “love” during the holidays.

While in Junior Kindergarten, he realized that he could collect Canadian Tire money to purchase gifts for another family, says Amy.  Years later, with help from his brother and parents, they now support approximately 15 to 16 kids every year, she exclaims.

“It feels good knowing we can help fill spaces under other kids’ Christmas trees”.  “I like that we are helping local families,”

Pictured above, Teagan (grade 7) and younger brother Grayson (grade 2) are shown sitting in front of their humongous pile of Christmas presents they collected and purchased this year.

“I like picking out the toys off their Christmas lists,”

Friends and local businesses the Gidney family knows also support the charitable campaign.  Mountainview Homes is one of the campaign’s most loyal supporters.  Dr. Riva’s dental office is also a generous donor.  Many friends and acquaintances offer donations by giving what they can offer.

Teagan says “everywhere I go people are always telling me how proud they are of us.  We just like doing it,”

Yes Teagan and Grayson, this is nice story about doing it right by giving back. From the early days of Santa Claus showing up in our community, to the Magi who celebrated the birth of Jesus on the first Christmas by bringing gifts of gold, frankincense, and myrrh, it’s all about giving back.  Thanks to the amazing acts of kindness shown by the Gidney boys and all their supporters chipping in to the campaign, some kids at Richmond Street School will get their Christmas wish. It sure sounds like the spirit of Christmas is spreading in Thorold.  Now we know the rest of story.