Thoroldites recently lost a great friend who we honour today in our  tribute to Wilf Slater.

On January 27th 2020, Wilf died just a few weeks short of his 90th birthday.  Born in Thorold, Wilf was proudly connected to our community throughout his life.  He was loyal to his family and friendships formed over decades in Thorold.

You could take the man out of Thorold but you couldn’t take Thorold out of this man.

“He always told me that he was hired at Henderson’s Pharmacy by my Father who owned the drug store.  I think the hiring was to start out by delivering flyers to houses, on the day I was born.  I always had a special connection with Wilf,” writes John Henderson.

Active in our community, Wilf was instrumental in the founding of the Thorold Sports Runway of Recognition wall of fame and attended the annual dinners as often as he could.

This Throwback Thursday photo taken in 2009 shows Wilf Slater with John Henderson at the pharmacy. They are in the store where Wilf started work as a delivery boy in September 1942. Wilf and John are displaying a framed news story about Thorold’s 1945 Ontario Midget B championship hockey team including Wilf and former Henderson employee, Charlie Thompson.

Wilf has written many of his memories and remembrances of events in Thorold especially as a result of being the “Thorold Reporter” for the St. Catharines Standard many years ago. This was followed by a prestigious career in journalism including 30 years in various editorial capacities for the Globe and Mail which he had even read on the morning of his passing.

Wilf’s licence plate and email address had “SOBEIT” on them which accurately reflected his ready smile and good nature and keen interest in people.

About Paul Carfagnini 231 Articles
Helping my clients grow their business with customized integrated media campaigns is what I do with a passion as a marketing consultant in Niagara. Exclusive options for a Niagara media plan include Intrigue Media video advertising on our community TVs; event marketing such as the Niagara Health Expo; as well as the My Thorold newsletter and online directory. As a Niagara-based media consultant, my proven track record includes experience in radio advertising, print ads, social media, video advertising, Internet marketing, public relations, and direct sales. As a communications specialist, my work has consistently produced results in radio, Internet, print and electronic media, event marketing, and community relations, along with advertising sales experience.

We Want Your Opinion in Community Survey 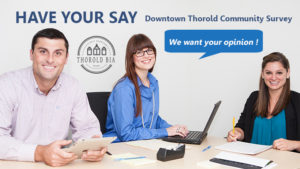